A traditional kernel manages machine resources and extends the machine capabilities through a system call interface, what would you say if I show you how to implement the last one? This post is about how to build a syscall interface on top of Linux.

It seems the fastest way to test a OS design on a well provisioned environment. This article was inspired by [1]. I had wished to implement the trampoline technique too, but I want to keep this the most simple as possible.

Ptrace is a mechanism to manipulate a child process execution. It's able to:

This is what you need to implement a Trivial, Stupid and Partial OS. It is able to inhibit the normal syscall execution and to replace it by your own routine.

Our TSP OS will know to serve only two calls:

VKern is launched as a Linux process, it forks itself as a child process. The child process requests to be traced and loads the application process image thanks to execve. Execve is a special case, is the last call atended by the real OS before VKern control taking.

The application is the unprivileged program running under VKern control. It could call the only two VKern syscalls. 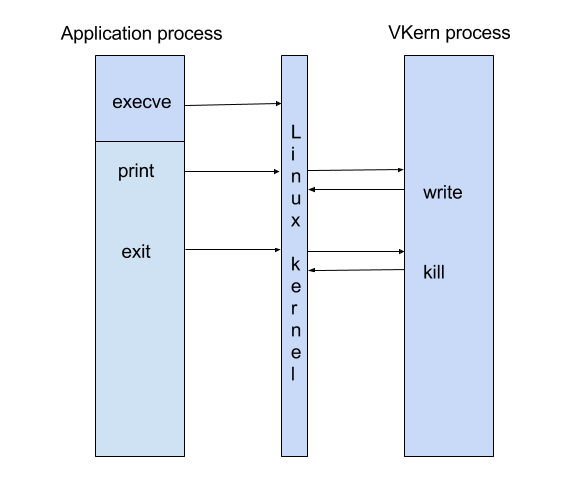 Call the OS from user space requires a little help beyond typical C constructions. GCC [3] gives the means to include inline assembler code like this:

Before syscall instruction creation on x86_64 [4], a software interruption used to be executed to transfer control to the supervisor. Linux setups entry 0x80 on IDT for that purpose. So, a syscall will look as follows:

%eax register specify the syscall number (0x0|0x1) and the remaining GP registers are the arguments.

The first linked program is vkern and the second one is an example program to say Hola. Please note that hello is not linked against libc, it just uses the vkern runtime rt.o.

Tutorial: Getting stream from Chinese sport camera
Radio Si740x on Olinuxino A20